Disclaimer: This review was made as a personal piece by the author and without the invitation from Hallo Hallo Entertainment.

A couple of girls squeeze themselves in one of the MRT trains. Some quietly wait for their destination, while others poke fun at each other to pass the time.

It’s amazing to believe that these girls are members of MNL48, one of the Philippines’ first idol groups and the Philippine sister group of AKB48. Their story was told through ICYMI: I See Me, the first documentary of the group.

ICYMI: I See Me tells the story of MNL48 in a non-linear fashion, happy scenes interspersed with heart-wrenching ones.

In a way, it is effective. For MNLoves, it represents the rollercoaster of emotions they have undergone for following the group through various events, online shows, and kalat Instagram stories and lives amid demanding idol work, personal matters, and heavier moments like insecurities and the ephemerality of an idol career.

For non-fans, the documentary gives them a glimpse of what idol life is like—the good and the bad—in a country where mainstream idol culture is starting to bloom.

The common misunderstanding by non-fans is that MNL48 is a copycat K-Pop group, but ICYMI: I See Me sets the record straight by stating that they’re not. In fact, MNL48 strives to diversify the Philippine music scene by incorporating a system of a Japanese idol group and putting a Filipino twist to it.

Of course, it’s not a walk in the park. Member Mari mentioned how difficult it was to explain to her relatives how handshake events are supposed to work. The girls couldn’t take autographs or take pictures of fans outside official events, and they had to be careful with interactions with the opposite sex.

ICYMI: I See Me tells us that although MNL48 strives to be united as a group, the 48G system demands that they be at the top of their game if they want to become one of the most popular members, otherwise known as the senbatsu.

The senbatsu (or the Top 16) members are selected by management in preparation for every new single. At least every three months, the girls audition in front of management and plead their case as to why they should be part of the senbatsu. Management makes their selection based on the audition, the suitability of the member for the song, and, surprisingly, other factors that don’t include talent. The chosen girls headline the title track of the song and get other perks, like being chosen to promote the group in international events.

Some members are fortunate to be chosen as senbatsu members for three (five, as of this writing) consecutive singles, while others are left behind.

Those who were not chosen expressed their frustrations and the awkwardness they felt toward members who were consistently chosen for senbatsu. But they never meant ill harm. After all, in their group’s system, every day is a competition, more against yourself than anything else. If you aren’t chosen, the insecurities pile up: Are they not talented enough? Don’t they look the part?

Especially when the 2nd General Elections happened. Unlike the traditional AKB48 elections, MNL48’s involved eliminating members who did not make the Top 48. Despite protests from fans to keep the first-generation members intact, and despite the members’ campaigns to keep their spot in the group, the eliminations pushed through.

As the eliminated girls bid their goodbyes, the girls who stayed went forward to embrace them and cheer them on. Despite the competitions and the frustrations toward each other, they remain sisters at the end of the day.

Screenshot from ICYMI: I See Me official trailer

More importantly, ICYMI: I See Me tells us to be kind to idols and be careful of what we say about them offline and online.

MNL48 came at a time when idol groups—particularly those in K-Pop—were starting to be embraced by a global audience. Unfortunately, as Filipinos come to admire the synchronization and perfection that K-Pop strives to put out to the world, the girls became the receiving end of hurtful comments.

In the documentary, the girls read out just some of the comments they receive regularly: “Nakakawalang-gana.” “Pabebe.” “Hindi sabay-sabay.” “Nagli-lip sync lang.” Most of the comments were made by skeptics who were certain at that time that the Philippines always makes cheap versions of anything that is successful abroad, while others were simply joining in on the hate.

Certain scenes show members scrolling through Twitter, solidifying the fact that they, in fact, see what fans are saying about them on social media.

The girls shared that they hoped that they would be accepted after they made the country proud after their performance at the first AKB48 Group Asia Festival in Bangkok. (Because Filipinos notice how talented you are only if you’ve made it abroad.) However, they received more hate, with comments like “MNL48 is a downgrade to the 48 Group.”

For girls aged in their mid-teens to their early twenties who simply want to fulfill their dreams, it’s difficult to imagine how this affects their mental health (Sounds familiar?), added to the pressures of daily training and personal matters. 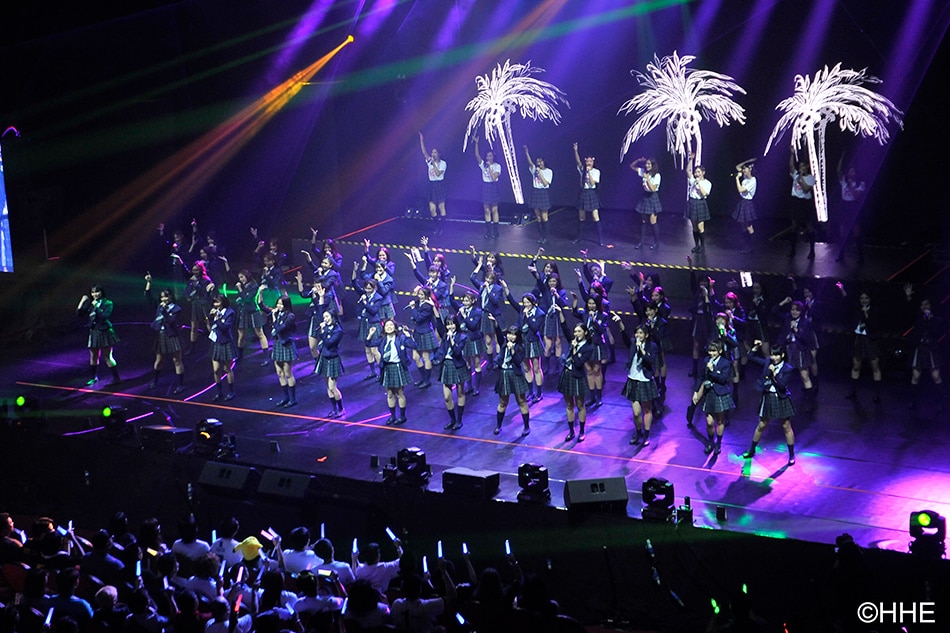 ICYMI: I See Me tells us that despite the challenges, the girls approach each day with hope and optimism. Their hope echoes in their song “First Rabbit,” which was commonly used throughout the documentary:

“Masusugatan, may matututunan, kahit ako’y lumuha, kahit pa masaktan, lahat ng hirap at dusa’y titiisin ko” (From every wound, there is something to learn, even if I shed a tear, even if I get hurt, I will endure all the pain and suffering”)

Three-time center Sheki had constantly mentioned that someday, she hoped the Philippines will love MNL48. In the documentary, she said that she would be happy if their group touched at least one person.

“Okay lang din naman kung wala,” she added. But in her signature playful nature, she quickly took back her words with “Charot lang!”

MNL48 may still be struggling to prove themselves in a harsh, judgmental world, but the girls remain hopeful. And with the many MNLoves who constantly come to their events, it’s safe to say that they have touched more people than they are planning.

ICYMI: I See Me had its world premiere on October 21 at the Cine Adarna: UP Film Institute as part of QCinema. There are no announcements yet for future screenings.