We know Im Hyunsik—or just Hyunsik—as a member of male idol group BTOB. Since his debut with the group in 2012, Hyunsik has charmed Melodys around the world with his adorable eye smile, amazing vocals, and overall dorkiness.

Now, PH Melodys will be seeing him for his solo fan meeting in Manila! As we get ready for D-Day, let’s took at some of the reasons why we’re in love with Hyunsik!

The Main Dancer with the Voice of an Angel

Hyunsik debuted on BTOB as the main dancer, but he blew everyone away with his angelic, husky voice. He was even part of the group’s subunit, BtoB Blue, alongside fellow vocalists Eunkwang, Changsub, and Sungjae.

As the son of famous South Korean folk singer Im Jihoon, it’s no surprise that Hyunsik pursued the path of music. From singing to composing, clearly the talent is in the Im genes.

Aside from his vocal skills, Hyunsik is an amazing composer. He has composed a ton of songs for his group alone, including “I Don’t Know” from their EP Move and “I Miss You” from their EP Complete. He is also the credited co-producer and co-lyricist for the title track “Pray (I’ll Be Your Man).”

Like many composers, Hyunsik is skilled with different musical instruments. He can play the piano and guitar.

I mean, look at those arms:

And remember when he beat Ricky of TEEN TOP at Korean wrestling?

Having studied in Shanghai for two years, Hyunsik is skilled in speaking Mandarin.

And remember when he and Eunkwang sang “Anak” by Freddie Aguilar at the OneK Concert in Manila? Multilingual king, indeed!

Hyunsik and His Body Full of Art

Hyunsik has a total of five tattoos on his body, and each one has a special meaning to him. The most prominent one is the one on his right arm, which means friendship. 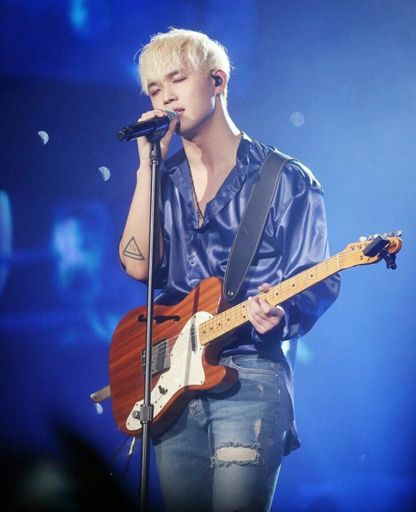 He also has an “M” tattoo on his arm, which supposedly means “Melody,” for his fans. Aww!

We’re excited to see Hyunsik in Manila. Are you?

Catch Im Hyunsik at his Dear Melody Fan Meeting in Manila on December 22 at the New Frontier Theater. Tickets are available at TicketNet online and at outlets nationwide.

This event is presented by CDM Entertainment.

Bea Mandachttp://youonlylutzonce.wordpress.com/
Bea was introduced to the world of Korean culture through Full House, Jewel in the Palace, BoA, and TVXQ. She is also a fan of J-Pop, figure skating, and tennis. When not in her day job, she likes to be alone in her room or in a café with her pen and paper, or a laptop. She co-runs a figure skating blog with fellow KStreet contributor Clara. You can reach her on Twitter.
Previous articleThis Month’s Beat: HINAPIA
Next articleTWICE is Bench’s latest Global Benchsetter!

Mokkoji Korea has selected the Philippines as its focus country for January 2021, bringing special live programs with K-Pop groups for Filipino fans from...
Read more