A Look at Yeo Jin Goo Before Hotel Del Luna

Maybe most of you came to know Yeo Jin Goo for his portrayal of Koo Chan Seong at the hit 2019 South Korean drama, Hotel Del Luna.

But did you know that the actor came a long way from where he is now? Let’s get to know him more!

Yeo Jin Goo was born on August 13, 1997 in Seoul, South Korea and is the eldest of two siblings. He studied in an all-boys school, making it hard for him to be close to girls.

As a kid, he had always wanted to be on television. His parents supported his desire for acting and sent him to acting schools in the early years. Even at just a young age, Jin Goo showed great passion and dedication in his acting career.

In 2005, he made his big-screen debut in the film Sad Movie. Outside work, or when he has free time, Jin Goo said he would go to theaters. He would often go to cafés and talk with some of his close friends. In an interview, he mentioned that his friends are actors Park Bo Gum and Kwak Dong Yeon, as well as BTS’ Jungkook.

In 2017, Jin Goo starred alongside his friend Dong Yeon in the 2017 drama Reunited Worlds.

As for his friendship with Bo Gum, Jin Goo admitted that it was unexpected. He said they usually met during awards shows and was surprised when Bo Gum approached him first. They even sent food trucks to each other which surprised many people.

A lot found their friendship really adorable. They even posted photos of the food trucks they sent to each other.

As for his love life? Jin Goo said in an interview that he wants to focus on his career and hasn’t actually thought about his dating life. 😉

Jin Goo received his first acting role in a drama when he was eight years old. He was cast as a sickly kid in the 2006 drama Want to Love Again.

He attracted more attention when he played the role of a young prince in the drama Moon Embracing the Sun with Kim Soo Hyun, as well as his close friend, Kim Yoo Jung. 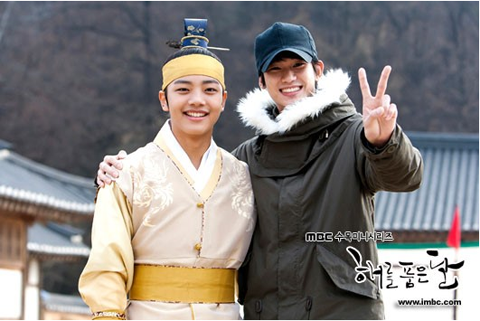 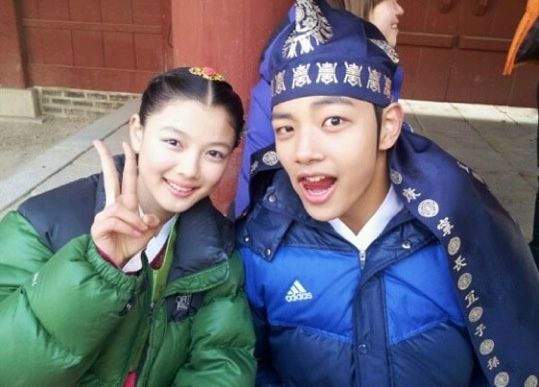 In 2013, Jin Goo landed his first leading role in the film Hwayi: A Monster Boy, where he portrayed a teenager trained to be an assassin.

He was only 16 when he starred in this film, yet he exuded excellent acting skills that led to his success—he became the youngest actor to receive the Best New Actor Award in the history of the Blue Dragon Film Awards.

For all these reasons, Jin Goo was dubbed the Nation’s Little Brother, just like Yoo Seung Ho. His rise to fame wasn’t a smooth road, but his efforts were worth it as they are slowly being recognized.

In 2019, he was cast in three consecutive dramas! The first one, The Crowned Clown, was ranked as the highest-rating drama for the first quarter of the year.

Shortly after, he played a humanoid robot in the fantasy rom-com drama My Absolute Boyfriend. And Jin Goo ended the year with a bang as he joined the cast of Hotel Del Luna which, as well all know, became the highest-rated drama in South Korea in 2019.

Honestly, I was curious about what the dashing Yeo Jin Goo can also do when he’s outside the acting arena. Looking into his hidden talents … I found that he is called the ‘nutcracker.’ Apparently, he can crack open a walnut with his bare hands.

Also, I can say that he has a knack for taking selfies. You can easily tell with his Instagram account which is filled with his awesome selfies!

As for dancing… well, his shuffle dance trended No. 1 in Naver Korea some time in 2018. He introduced this dance in a tvN’s 2018 variety show 4 Wheeled Restaurant. Check out this cute video of him!

But of course aside from that, he can sing really well (I actually expected this because of his rich, deep voice). He also plays the piano!

So if you want to see him sing and to get to know him even more, purchase a ticket now for his first-ever Manila fan meeting ‘Memory Line’ on February 1, 2020 at the New Frontier Theater! Tickets are now on sale online and in TicketNet outlets. This event is presented by Wilbros Live. See you there!

Running Man in Manila is officially sold out!